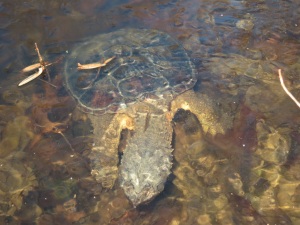 In summer, the ponds at Long Branch and Gulf Branch Nature Centers are a lively places. Green Frogs and bullfrogs sit along the edge or float in the water. Turtles bask on logs and rocks. Northern Watersnakes lie in the sun or patrol the water for frogs to eat. Dragonflies and damselflies zip about in aerial duels or in pursuit of prey.  Green Herons silently stalk fish and frogs.

As fall advances and the weather turns colder, this activity slows and finally ceases, at least above the surface. Beneath the surface, though, the ponds are full of life, even when they are covered by ice. One of the many unusual properties of water is that it gets less dense and lighter as it approaches the freezing point.

Like most substances, water becomes denser and heavier as it gets colder. Water, however, does something odd––it starts to get less dense and lighter after it falls below 39o F (3.8o C). As a result, water colder than 39o F rises above the warmer water. At 32o F (0o C) water turns to ice, which floats on top of the slightly warmer water underneath.

If it didn’t, our ponds would freeze from the bottom up and probably remain mostly frozen all year round. Very little, if any, life could survive in that environment. This is especially important for animals that spend the winter underwater.

Bullfrogs and Green Frogs hibernate at the bottom of the ponds, breathing through their skin. Frogs usually lie on the bottom rather than dig into the oxygen-poor mud because they maintain a relatively high (though still pretty slow) metabolism during hibernation. If they burrowed into the mud, they couldn’t get enough oxygen to survive.

Painted, snapping, and other native aquatic turtles also breathe through their skin during hibernation, but maintain a much lower metabolism than frogs. Consequently, they need less oxygen and can afford to bury themselves in the mud.

In more northern latitudes, where ice can cover ponds and lakes for months and oxygen can be depleted, turtles have another trick up their shell. They can switch to anaerobic respiration, meaning respiration without oxygen.

However, this trick can result in a lethal buildup of acid in their bodies. To counter this, turtles can use buffering agents in their bodies, including the calcium in their shells and bones, to neutralize the acid. Turtles can survive for months this way with little or no oxygen!

Both frogs and turtles sometimes become active under the ice and can be seen moving slowly about. You might also get a glimpse of other winter-active pond life, including fish or aquatic insects such as Water Boatmen and Predaceous Diving Beetles. As cold as it is, the water under the ice is still warmer than the often subfreezing temperatures on land.