Text and photos by Jo Allen

This was my first year volunteering at the Firefly Festival at Fort C.F. Smith Park. I got the “bug” last summer at Bat Fest at Gulf Branch Nature Center, where I helped dozens of kids stamp scarves and bags with bat images. It was so much fun, especially seeing the creativity the youngsters expressed. I had always wanted to attend the Firefly Festival (organized by Rachael Tolman, Park Naturalist at Long Branch) but just had never signed up. This was the year.

I was assigned to the table next to Ken Rosenthal, a park naturalist at Gulf Branch Nature Center, whose “Deep Dive” presentations into everything from migratory birds to white tail deer to eels have held audiences rapt each time he gives them. Ken was loaning out bug nets and clear jars to kids for 10 minutes at a time so they could see what they could catch. Grandparents were the best at showing kids how to do this effectively (probably because they did the same activity in their youth). Remarkably, kids of all ages returned the gear in time, no arguments. And some came back with bugs of all kinds, which Ken quickly identified and, with luck, photographed. One team returned a jar with six fireflies. Many others brought earlier-evening insects. But there were so many fireflies that it was possible to catch one carefully by hand as it helicoptered up, blinking its mix of luciferin and luciferase bioluminescence in search of a mate.

My table illustrated how other nocturnal creatures—moths and bats—find their “perfect partner.” Or in the case of bats, their perfect prey: moths.

Photo of the moth/bat craft stand.

Kids were told that male moths detect pheromones of females with their fluffy antenna (think feather boa) and that female moths have plain antenna (mere pipe cleaners or chenille sticks) by comparison.

Only girls wanted feathery antenna. And given a choice, most kids went for bat ears, which were more complicated to make, but really fun to wear! 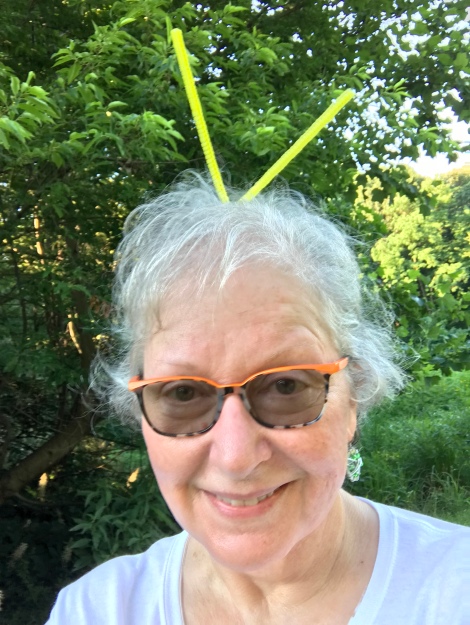 I made nearly all of the antenna and ears headbands myself even though this was supposed to be a kid craft project. I realized I needed to do a lot of the assembly when I handed a pair of kid scissors to a little girl who was handling them awkwardly.

“I don’t think she’s ever used scissors,” her dad said. “She’s only three.”

“I use them in preschool,” she promptly corrected.

But she was struggling, so I cut the flap on her paper bat ears, glue-dotted them to the chenille stick I had cut in half and twisted onto a plastic headband and placed it on her head.

“Can you hear better now?” I asked.

Echoing every youngster, and one adult, after donning their bat ears, she replied, “Yes!”