Who would have thought that on a freezing day in January on a bare-tree, brown slope of an urban park you would find an occasion for laughter, joy, and triumph? Not me.

I had dressed for the weather in my waterproof boots, and brought along my ivy-fighting tools to join the ARMN Master Naturalists in the mighty battle against English ivy at Barcroft Park on the MLK Day of Service.

On the Barcroft Park website, twenty-two lines are given to the description of amenities at the park, which include playing fields, picnic tables, and so on. What they don’t mention is that the park is also the site of several 200-year-old trees, more than 45 acres of native woodlands, and a magnificent magnolia bog with several species of endangered plants.

On this wintry morning, our little group was surprised to find an unexpected flood of participants pouring in to our meeting site. We were suddenly a crowd of unfamiliar faces, children, and older folks!  What had happened? It turned out that these new volunteers had found us by typing their zip codes into the search box on the MLK Day of Service website. Wow! The power of the mighty Internet!

All of the people I talked to had chosen to come to give service to Barcroft Park because they loved it and often enjoyed its resources. Some had come with tools to help with the Ivy, but many had just come. We didn’t have enough tools to share with everyone, but we did have lots of trash bags, and those who didn’t have tools were happy to haul trash away.

Rebecca Frank and daughter Myriah remove Ivy carefully off a trunk. Myriah is a member of the TC Williams High School Environmental Club.

Jim Hurley, who was our leader of the service day, gave the group a little background on our goals at the park, and then a representative from the MLK Day of Service organization also discussed their goals. She said that one of the hopes of her group was that people would realize the importance of their volunteer work and give serious thought to making a commitment, right then, to ongoing service. She carefully explained that not everyone had a lot of time to give, but if everyone there gave only an hour a month, it would be a meaningful contribution.

Next to me, a mom and her young son were discussing what they could do. The mom asked, “What do you think? I think an hour a month is something we could reasonably expect to achieve.” The little boy looked up at her and said, “An hour?! I think we should give a day!” One of those moments. I had only come to pull Ivy. The joy of that spark has been an ongoing gift.

OK. I promised some laughter, and here it is. The group that was sent up the hill to fill the trash bags had evidently never ventured off the bike trail, because shortly after we left, we heard screams. They were not panic-type screams, but loud enough to send me running. They had come right up to the edge of a small stream and split into two groups: the adults going around and the kids, of course, going over.

Now the stream was not wide, but on either side was deep mud. One girl was clinging to the end of a huge tree trunk which spanned about half the stream, and her friend was on the other side. Triage. Girl number two had left a shoe embedded in the mud and was standing on one foot in a quandary. No way was she going to re-enter the mud to get the shoe. The mom in charge was begging the girl on the tree to retreat. No way was that going to happen either.

Where is my shoe?

“I’ll get the shoe,” I volunteered, “I have waterproof boots on.” ”No, no,” said the mom, “I’m the mom. I should do it.” While we were debating the moral ramifications of this issue, the previously-mentioned little boy, I don’t know how he got across, darted in, snatched up the shoe, delivered it to the girl in distress, and ran on up the hill in the wink of an eye, without bothering to wait for any thanks.

In this brief interval, the little girl clinging to the tree had also come up with a solution to her problem. “Can I jump onto the trash bag,” she queried. “NO!” said the mom, just as I shouted, “SURE.” I have to hand it to that mom. She didn’t drag the wet-footed kid home to sit by the fire; she just shrugged her shoulders and laughed, heading off to the bridge. The jump was highly successful. I cannot attest to the residual properties of the trash bag.

But our group did a monumental job. Our bags, combined with those of the other groups in the park, must have been more than enough to fill a dump truck. This was just one of the more memorable piles. 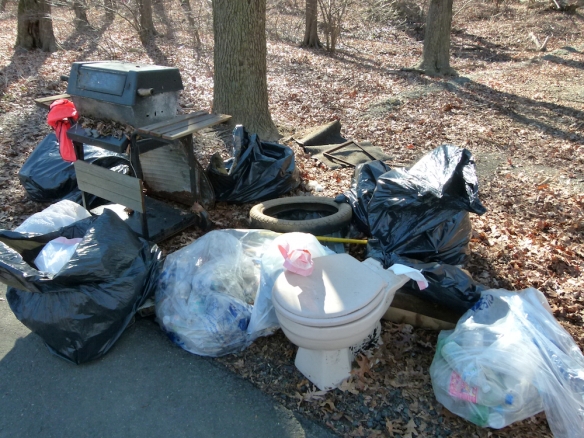 An assortment of trash collected.

The results of our Ivy work were astounding. The County had allocated a significant amount of money to treat all of the invasive exotic species in the park, including the dense mat of Ivy on the ground. Under the Ivy are natives that are already starting to make their way back. We had made the money go farther by committing to hand cutting the Ivy off the trees, and with the extra help we had on this workday, we managed to finish an entire section. Triumph.

The volunteer work part of the day was over at noon, but about a dozen people stayed and took advantage of ARMN’s offer to participate on a tree walk. It was wonderfully gratifying to see the interest and to hear the excellent questions from the participants.

Jim explained some of the many possible ways to ID a tree in winter, starting with a Liriodendron tulipifera tree, commonly called a tulip poplar though it’s a member of the magnolia family. The fruiting structure still supporting seeds waiting to blow away is a real “tell.” You can see that this tree is a good wildlife feeder. 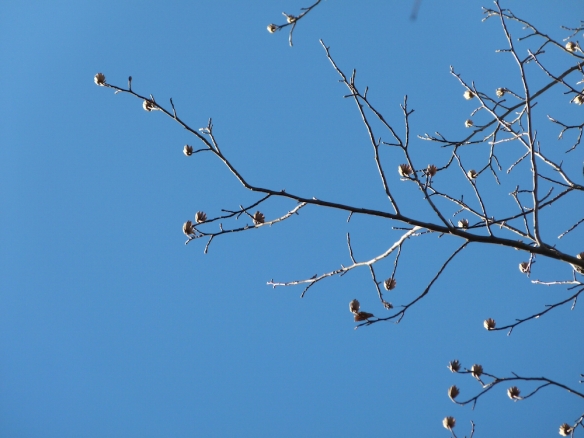 Jim continued with the Carya family, oaks, the persimmon stand, and black gum among others.

A successful day by any measure! Come out and join the effort. It’s a good time!