The Christmas Bird Count season is here once again. There will be opportunities for ARMN members to participate in this great citizen science effort with a 114-year history this season.

This great Virginia Society of Ornithology page lists the known counts and points of contact in Virginia and links to a Maryland site:  http://www.virginiabirds.net/cbc.html

Jim Olivetti, a graduate of the first ARMN training class in the fall of 2008, sent this photo of a snowy owl taken near his home in Massachusetts.

Snowy owl seen on 8 December 2013 on the Massachusetts Bay beach causeway leading to the town of Nahant, 12 miles north of Boston.

A friend of Jim’s took this photo on December 8 on the Massachusetts Bay beach causeway leading to the town of Nahant, 12 miles north of Boston. Jim follows ARMN activities from afar and sends this photo with holiday greetings to all.

There are also reported sightings of Snowy Owls at Manassas Battlefield and at Dulles Airport. Volunteers participating in this weekend’s Christmas Bird Count may be in for a treat!

There is still time to sign up for the 114th annual Christmas Bird Count: http://birds.audubon.org/get-involved-christmas-bird-count-find-count-near-you.

Participation counts for volunteer hours and may count for advanced training.

Steve Young and Jim Olivetti contributed to this post.

ARMN members, Master Gardeners, and others who had the good judgment to attend an information session at Fairlington Community Center on October 10 were rewarded with two hours of advanced training––and a lot of bee-themed standup, courtesy of Sam Droege. 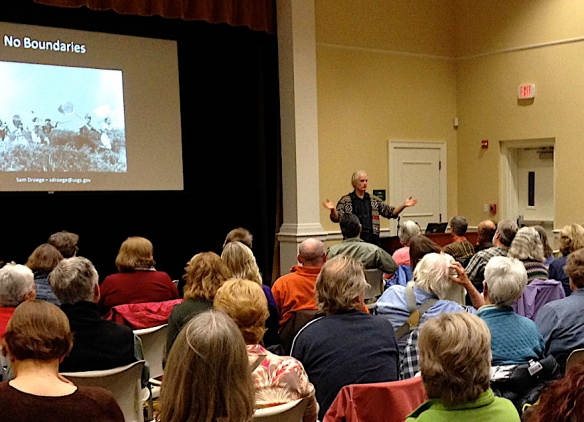 Droege, a wildlife management expert with the USGS Bee Inventory and Monitoring Lab, shared his vast wisdom about North American bees, their habits, and their undisputed value as pollinators, while busting some of the myths surrounding the often-misunderstood insects.

Based at the Patuxent Wildlife Research Center, Droege has designed and carried out surveys and inventories of birds and amphibians, but bees are his current passion. His survey efforts involve photographing hundreds of the 4,000 North American bee species at close range and high definition and making them available to researchers and the public to view and use. These stunning photos can be seen at www.flickr.com/photos/usgsbiml END_OF_DOCUMENT_TOKEN_TO_BE_REPLACED

In response to a request from the staff of Chesapeake Bay Foundation (CBF), ARMN members Melissa Perez and Kasha Helget got their feet (legs, and knees) wet on Friday, May 10th to assist in the reconstruction of a celery grass enclosure on the Potomac River’s Belmont Bay at Mason Neck Park in Lorton.

Perez is a grass grower and Helget is a regional coordinator in CBF’s “Grasses for the Masses” program. In this program, Virginia residents grow underwater celery grass (Vallisneria americana) in their homes or schools during winter, and then plant the grasses during spring in Belmont Bay at Mason Neck Park or in James River. The aquatic grasses filter nutrients and provide important habitat for fish and other aquatic creatures, and help restore the health of the Chesapeake Bay.

The grass plantings take place on several days between mid-May and early June; however, CBF staff was notified that the enclosure at Belmont Bay was destroyed by some errant driftwood and needed to be rebuilt before the grass installations could be done there. 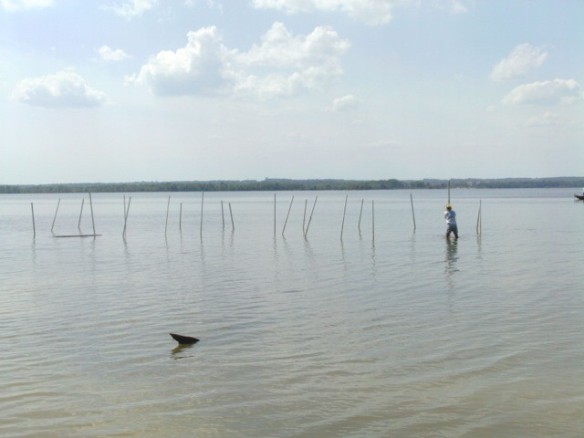 Bare enclosure for celery grass prior to installation of new screening to protect the new plantings. (No, the driftwood in the foreground is not a shark.) 🙂

So, a group of seven CBF staffers and volunteers jumped (waded) in to replace screening around the enclosure and anchor it to the sand for better support, and to prevent turtles and other large interlopers from entering the enclosure and destroying the grasses. 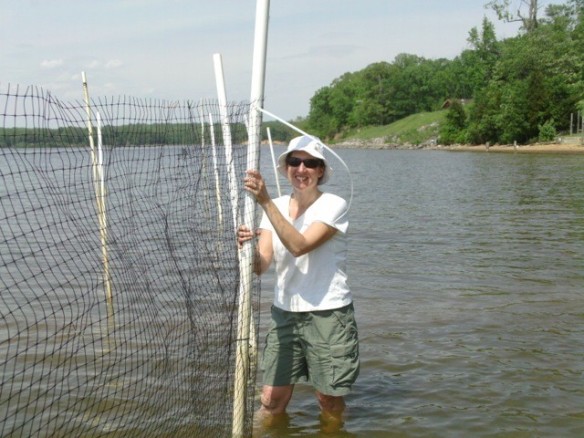 END_OF_DOCUMENT_TOKEN_TO_BE_REPLACED

By Jeanette Murry and Alan Tidwell

We  graduated from the spring 2012 ARMN Basic Training Course. During the summer and fall, we volunteered on a camera trapping project called eMammal organized by the Smithsonian. We focused on Keyser Run Fire Trail in the Shenandoah National Park for our trapping.

When we saw the eMammal Project advertised through the ARMN listserv, it sounded interesting and challenging, so in August we went along to a half-day training at the Smithsonian Conservation Biology Institute at Front Royal, VA.

Tavis Forrester, eMammal Project Coordinator and a wildlife biologist, describes the project: “eMammal is a large-scale NSF-funded citizen science project using volunteers and remote cameras. eMammal is a further development of SI Wild, an existing project that has pooled camera-trapping images from all over the world and will be expanded to allow volunteers to upload data, and then expanded again to allow visitors to analyze and visualize data.”

Our role, under the excellent guidance of Megan Baker from the Smithsonian, was to deploy 3 cameras – one on the trail at a specified location, the second and third cameras at 50 and 200 meters respectively away from the trail. After 3 weeks, we would collect the cameras, change batteries and SD cards, and then redeploy the cameras to the next locations. We did a total of 4 deployments, finishing on November 10. END_OF_DOCUMENT_TOKEN_TO_BE_REPLACED

Several endeavors by Arlington Regional Master Naturalist (ARMN) on education of invasive plant species and alternatives converge at Potomac Overlook Regional Park (PORP). One is the ARMN Audubon at Home (AAH) focus summer project which had its kick off meeting on June 24 at ARMN’s native plant garden after “Meet Me On A Sunday” at PORP. The program included AAH ambassadors and potential future ambassadors with a schedule of site visits to ARMN member yards. 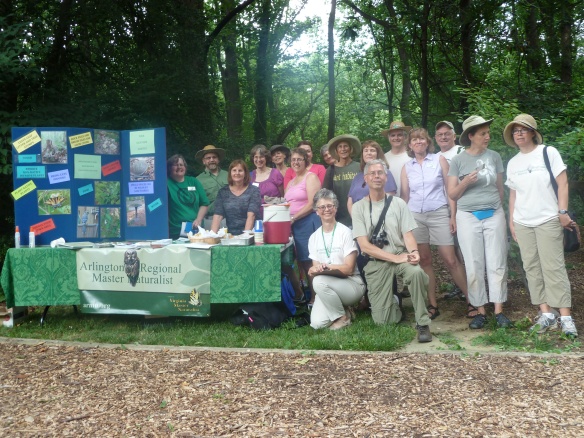 Garden creators Joanne Hutton and Kathy Landis gave an overview of the AAH focus project and a tour of the shade garden to show ways to enhance habitat. 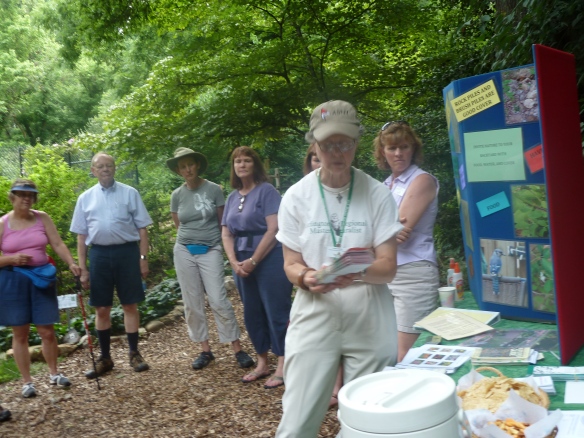 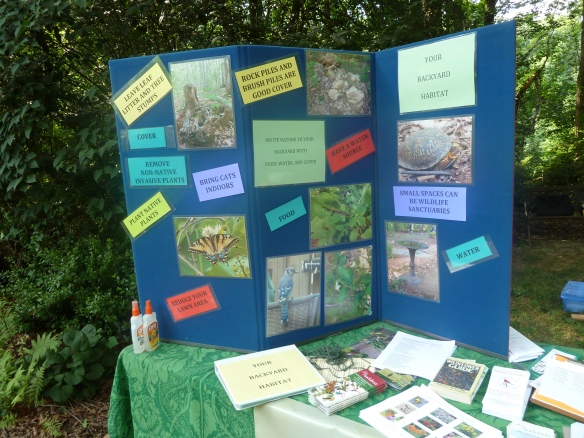 Good table top display and training references for the program.

END_OF_DOCUMENT_TOKEN_TO_BE_REPLACED

When I read on the Arlington Regional Master Naturalist listserv several weeks back about an advanced training opportunity on botany, “Let’s Scope it Out! Advanced Botany.” I excitedly signed up. A little bit too eager, I missed that the word “advanced” modified “botany,” though it also qualified as advanced training.

As the class began, I planted myself at a table with a microscope, various texts, handouts, and plant samples. Once our instructor, Emily Ferguson, began speaking, I realized immediately that I was in over my head.

While a lot of the terminology drifted in one ear and out the other and feelings of inadequacy washed over me, I confessed my error to my learned table-mate, who reassured me that we would all be learning something new. Indeed, I did! 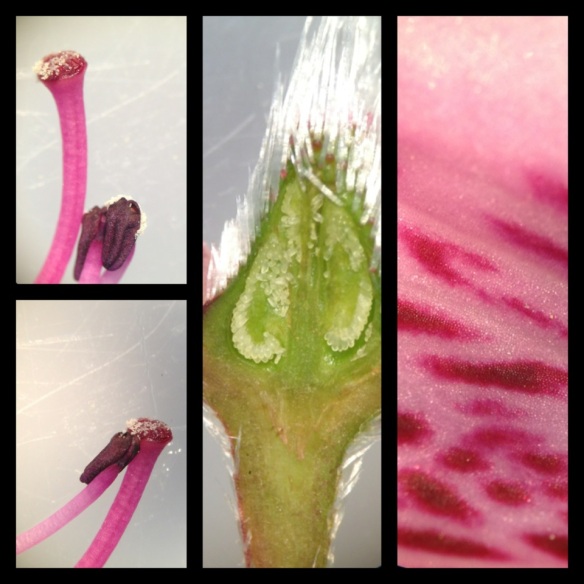 While I was weak on plant ID and terminology, I let my curiosity by my guide. I grabbed the razor blade and a pair of tweezers and began slicing as directed. As one of my classmates put it, looking at anything under a microscope is fun. How true!

END_OF_DOCUMENT_TOKEN_TO_BE_REPLACED 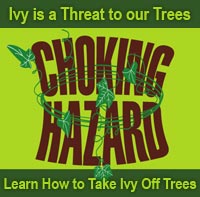 While mosquitoes are much less active as temperatures drop below 50 degrees, some ticks, like the black-legged (deer) tick, stay active all year.
Learn how to identify, control, and protect yourself from both mosquitoes and ticks in an environmentally safe way. For more information, click HERE.

The latest Plant NOVA Natives newsletter addresses the benefits of "plant communities" when you're planning your native plant landscapes. Plants that evolved together do better in groups and there are plant groups for every situation.

Wait! There's more!
Plant NOVA Natives has launched Plant NOVA Trees to encourage residents and businesses across Northern Virginia to plant more native trees and preserve the ones we have already! To learn more, click HERE.

See Volunteer Opportunities for ongoing events at which you can provide help.